Vienna waits for you… Yes it certainly does.

Vienna. Words cannot describe how gorgeous this city is, another place where I felt perfectly safe just walking around. It was how I imagine Paris to be. Very weird that I felt like I was in a French city when actually in an Austrian one.

By this time on my travels I was getting bored of the museums and intelligent stuff so I decided to save the tours till I go back next time (and I most definitely will.) So I went shopping instead. I needed a few things that I noticed that I had not thought to bring with me, so I made a stop and got a new SD card because there was no doubt in my mind that I would need to change them over very, very soon (ended up being the next day.)
The sun was shining, making me very hot. I got a little concerned that I would burn and  I also failed to bring a hat (well done me.) Thankfully I did not burn on the first day, I spent most of it jumping from shop to shop taking refuge from the sweltering heat.

I had realized that what I saw of this city was utterly beautiful and honestly, if I could go there right now, I would in a heartbeat 😀

Luckily, I decided to make the very short journey on the underground to the Schonbrunnen Palace. A Palace showered with historical moments. It is the place that the Archduke Franz Ferdinand was taken after he was shot and later died, this began the first world war. It was surreal to see the room which he died in. It was not all fantastic, I can remember messaging my mother about the other tourists around me. I was annoyed that there was no decorum in the smallish corridors, you would be walking around at a nice pace and then people in front of you would just randomly stop, so you would have about five people pushing you from behind. I was not a happy bunny, but the palace gardens most definitely made up for the hustle and bustle that came from inside.

Although the rooms were magnificent, my favourite part of the visit was being able to wander around the vast gardens, exploring the great treasures that the Austrians hid away. I was surprised that every time a turned a corner there was something glorious. Including a fountain, smaller than the Trefi in Rome but just as beautiful. 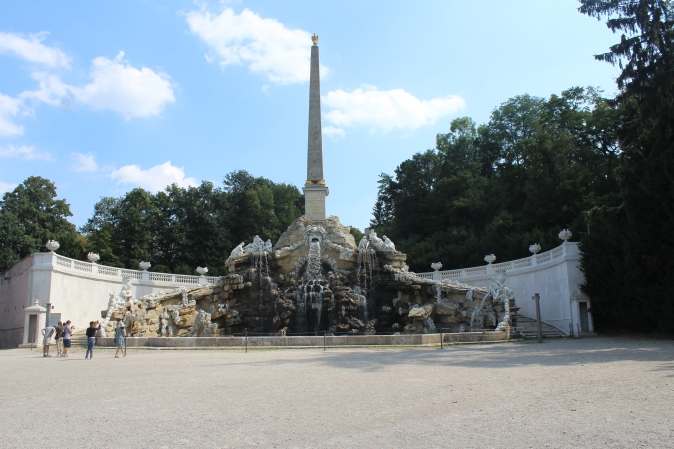 Just minutes after dragging myself away from this sight I saw a beautiful, large building on top of a hill. Inside there was a cafe where I sat, enjoyed the sunshine and a lovely slice of apfelkuchen. Before that, I climbed the narrow staircase to get to the top of the building, and what a sight I found when at the top. I could see the entire city of Vienna, and it was beautiful. It felt like I was at the top of the world.